Shumards oak is a pyramidal tree, growing 50-90 ft. and becoming more open at maturity. Bark is thick, smooth and grayish, becoming furrowed and darker gray. The columnar trunk is frequently buttressed at the base. Lower branches are chiefly horizontal. Leaves frequently turning scarlet in the fall, up to 7 inches long, with 2 to 4 pairs of pointed lobes with soft, bristlelike tips. Sinuses between the lobes reaching from 1/2 to 3/4 the distance from the tip of the lobe to the leaf midrib. Acorns almost as wide as long, 3/4 to 1 inch long when mature with a broadly rounded apex and a flat base.

A handsome shade tree, suggested as a substitute for Scarlet Oak (Quercus coccinea Muenchh.), though not so hardy northward. Named for Benjamin Franklin Shumard (1820-69), state geologist of Texas.  It has small, usually 5-lobed leaves, small acorns, and hairy red buds (instead of hairless brown). Shumard oak is what can only be called a botanist’s species, usually unrecognized by lumberman and layman, but an object of triumphant discovery to the botanical fraternity. 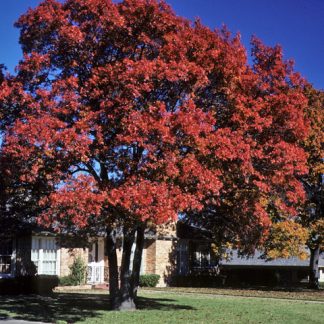