Aesculus flava, commonly called yellow buckeye, is a medium to large deciduous tree that grows 50-75’ (less frequently to 90’) tall with an oblong-rounded crown. It is the largest of the buckeyes that are native to the U. S. Fall color often includes attractive shades of yellow-orange. Yellow flowers (each 1/2 to 1” long) in erect panicles (to 6” long) appear in mid-spring. Flowers are followed by the familiar buckeye fruit, which is a globular dehiscent capsule consisting of 1-2 buckeyes encased by a leathery light brown partitioned husk. The husk is smooth on the outside, unlike the spiny Ohio buckeye husk.

Easily grown in average, medium moisture, well-drained soils in full sun to part shade. Prefers fertile, moist, humusy-sandy loams. Foliage tends to scorch and generally depreciate in dry conditions. This is a taprooted tree that once established is difficult to transplant. Zone: 4 to 8 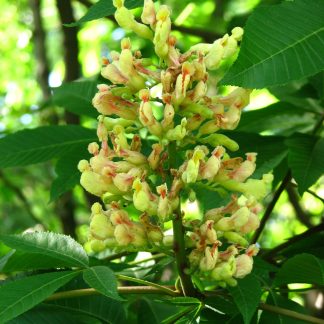